On Sunday, October 1st, a man without clear motive unleashed terror via gunfire on an unsuspecting crowd in Las Vegas, killing 58 people in what would be the most devastating attack on American soil since 9/11. In response to this incident, instead of a solemn of silence or consoling speeches to the suffering families, nor a opening to discussion on gun laws, instead one of the most pathetic responses to tragedy in America’s history. No, instead president Trump emphasized how it could have been worse:

“The speed with which they acted is miraculous and prevented further loss of life. To have found the shooter so quickly after the first shots were fired is something for which we will always be thankful and grateful. It shows what true professionalism is all about.”

If his stance on law enforcement wasn’t brutally enforced enough, he awarded 1 million dollars to the LVPD out of the emergency response fund, funding used in areas of devastation, such as (not) Puerto Rico (But he threw them a few paper towels, that should suffice). Now to clarify, this topic of probing isn’t just about Trump’s response to Las Vegas, or any tragic event requiring some level of empathy for others, ( with the exception of “some good people” in Charlottesville). No, my argument lies in the GOP as a platform, its followers and constituents as a festering monster of a culture that I refuse to condone. This, not an article comprised of sole vitriol, but a plea for common sense, my petition for the restoration of critical thought in secular government in place of ambiguous rhetoric and deflection of the real issues at hand. Because, logical rationalization of prevention and understanding would have been what true professionalism is all about, Mr. President.

What troubles me even more was a response to recent shootings by the 700 Club’s Pat Robertson. In the wake of these tragic events, once again, we are met with not compromising sympathy for the deceased, but utter ignorance: 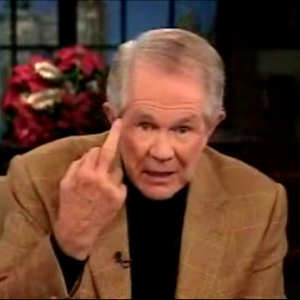 Once again, the history of politics retains it vicious cycle of fallacious rhetoric, back and forth, even in the face of tragedy. More so than ever since Trump’s inception in the White House, every reaction to conflicting issues has rendered many dumbstruck, continuing a slippery slope of repulsive insults and abusive usage of power. Trump represents a beacon of ignorance attracting the idiocy in this country, fueling his side in endless culture wars between political extremists from both parties. One consistency that has stood the test of time, especially in this past election, is the lack of critical thought, politics finally establishing itself as reality TV; nothing more than appealing to the ignorance of the masses. Just as not every scientist is an expert in all colleges of study (stop asking Bill Nye about climate change), not every politician understands the difference between fact and opinion, subjective and objective; secular and religious. This is where I have a problem with our government in particular. Yet people in power often make decisions to which they have absolutely no knowledge over the weight of these choices (Climate Change is real). One area of question I would love to be asked of a potential candidate mid-election, preferably on the spot and with out allowance of consideration:

What do you consider good and evil? Where is it’s place in policy and implementation of secular law?

It might seem like a mediocre topic to some, but bare with me. This greatly affects the justice system and policy implementation here in the United States. Because this is involves more than persona’s like Robertson or Trump, Giuliani’s appeal to the RNC, Hilary’s well timed responses to Trump’s idiocy, even every Jimmy Kimmel’s tear filled speech. When tragedy strikes, look at the responses from lobbyist groups such as the NRA, prominent Televangelists, most commentators from Fox News, anyone behind the scenes influencing government policies, the real Diamond Dogs in the background. The overly ambiguous moral codes of these individuals continuously seeps into the supposed foundation of secular democracy. This inevitable ‘fluidity’ of morality is widespread across American politics, notorious in policy change, the decline of legitimate news reports, the desecration of fair politics, and most, if not all of the numerous flaws in the US Justice System (Look up the case of Adnan Syed). To put it blunt, there is no place for religion of any walk of life allowed to even be referenced in a supposed secular state, it will simply never work out unless removed from the equation.

Whether it was Trump, Sean Hannity, or most conservative pundits on the subject of gun control in the wake of the shooting, every trick in the book was ripped to avoid conflicting with their narrative, their religious manifesto to conservative sanctity. This is where true colors were shown, when it would be time to set platorms aside and discuss how a man managed to sneak in over 40 guns to a hotel and decimate a crowd of peaceful inhabitants. Yet a lack of empathy the only consistency in their argument. It is obvious to anyone with half a thought for critical thinking to know the topic now should be gun control, especially blocking the Hearing Protection Act (attempt to remove theban on the silencer bill) currently being shoved through Congress as I write this, not a possible attack on “Christian” country singers from a possibly atheistic shooter.

When tragic events like in Las Vegas happens, it is easy to write it off as simplified explanation, such as some overarching evil, an external entity attempting to disrupt the peace of human society, preying upon the innocent. It is easy to look at events like 9/11 and write off a group of people as evil, the villains bent on destroying your slice of peace without any particular reason other than you are good, or you are christian.

It is easy for people like Pat Robertson to write off the Nashville church shooting not as a clear indication of needed gun reform, but an obvious sign of disrespect for the authoritative and militarized figures telling us what to feel. It’s easy to side with the man who claims Kaepernick is disrespecting the troops when he avoided the draft, and without remembering less than a year ago, was the same man who said John McCain wasn’t a war hero simply because he was caught. My ambiguous point is this: It’s easy to sum up the problems of the world through spiritual and ambivalent means like good and evil, just as it is easy to hate someone or something you don’t understand, or overly support without objective research because you align with them. Objectivity has always had an uphill battle in remaining relevant among the leaders of today, as it is the only voice that attempts to understand and make sense of the chaos around us. It is the difficult road in the progress, but the road nonetheless.

“It’s a dangerous over-simplification to believe that some people are innately ‘good’ while others are innately ‘evil’ or ‘bad.’ This misleading concept underpins the justice system of many countries – ‘bad’ people commit crimes, and since they are intrinsically ‘bad’, they should be locked away so that they can’t harm us with their ‘evil’ behaviour. This concept has also fuelled many wars and conflicts in history, and even in the present day. It makes groups believe that they are fighting a just cause against an ‘evil’ enemy and that once the ‘evil’ people have been killed, peace and goodness will reign supreme.”

Human’s are infinitely more complex than any religion or imagination can process. In human beings, terms like ‘Good’ and ‘evil’ are always going to be fluid, as these are concepts only associated through our actions and thoughts, and there is never one without there. Personally, I think the biggest unexplained power is the human brain; specifically the depths to our mind, which has shown to be connected to something bigger than ourselves, much bigger than any instagram pic or Hilary’s emails. We should focus our divisive culture on objectivity, making an honest effort towards human progression in understanding one another and the universe around us, maybe make policies based solely off the recommendations of those researching in their respective fields.

People are a varying balance of not ‘good’ and ‘bad’ qualities, but relations, memories, and a reflection to the reactions we have made in the face of adversity. You want to know what makes a person tick, ask them, try to understand them, hell look up Bronfenbrenner’s Ecological Model. There is no quantifiable definition to evil (ignorance is a good start), no level of measurement of good, we are not here for any particular reason. I’m not saying there’s no room for hope or expression in the human condition, quite the opposite. I am saying there is nothing stopping us from trying to understand one another, so reach out and touch somebody.